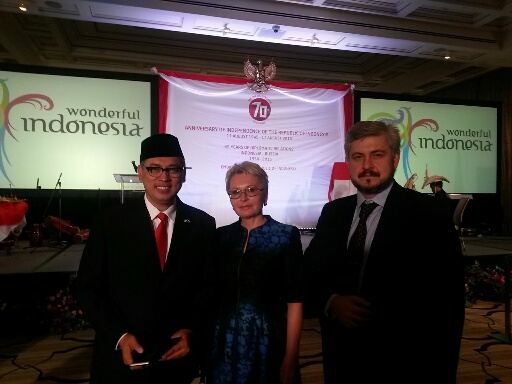 On September the 17th 2015, at the Four Seasons Hotel managing partners Irina Gorbulina and Oleg Gorbulin took part in the gala reception celebrating the 70th anniversary of the proclamation of independence of the Republic of Indonesia.
The evening was opened by the Extraordinary and Plenipotentiary Ambassador of the Republic of Indonesia in the Russian Federation Djauhari Oratmangun. The national anthems of the Republic of Indonesia and the Russian Federation were performed on stage. The parties noted the positive development of bilateral relations in the sphere of politics and the economy, as well as the humanitarian sphere. After the official events, a concert of creative teams from various provinces in Indonesia took place. The reception was attended by representatives of political circles, the government, the public and the business community of Indonesia and Russia.